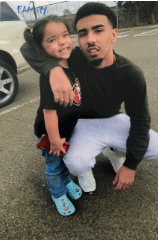 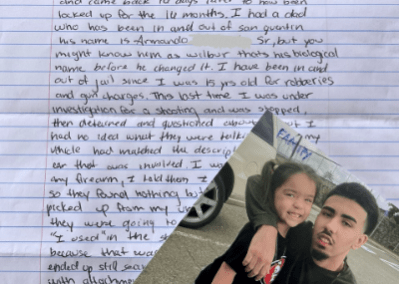 I have struggled. I told myself I would never be like my father, until I got a taste of the street life, fast money, fast cars, and the baddest women. Growing up in Vallejo it ain’t nothing but that.

My dad has been in and out of San Quentin. I have been in and out of jail since I was 15 for robberies and gun charges. This last time I was under investigation for a shooting and was stopped, then detained and questioned. I had no idea what they were talking about. My vehicle had matched the description of the car that was involved. I was searched for a firearm. They found nothing, but some mail I had just picked up from my uncle’s house. They said they were going to search his house for the weapon ‘I used’ in the shooting,  but I said they couldn’t because that wasn’t where I lived. They still ended up searching his house and found an AR-15. The people in the house said it was mine. I ended up pleading guilty and sentenced to five years.

Since being incarcerated, I’ve graduated high school, started college and completed many other programs. Doing time separates the real from the fake, living life fast you are always on the go. You can’t tell the difference between salt and sugar, until you taste it. Growing up I lived in a domestic violent household and have been mentally and physically abused. I moved from house to house, bullied and was the bully. I have struggled. I told myself I would never be like my father, until I got a taste of the street life, fast money, fast cars, and the baddest women. Growing up in Vallejo it ain’t nothing but that. I really didn’t have a choice being the oldest male in the house with a single mother. I robbed to eat and  basically live. I made alliances and enemies so I had to carry a pistol to survive in my community. I went to my local high school and was robbing people back to back. I was under investigation for 50 different robberies, the school never filed charges though. I hope to live life legally and correctly, I want to be able to be free and happy. The streets are for the birds. I don’t have many pictures, only one with my little sister on a furlough from jail for a funeral. I am a family man and want to be a positive role model.