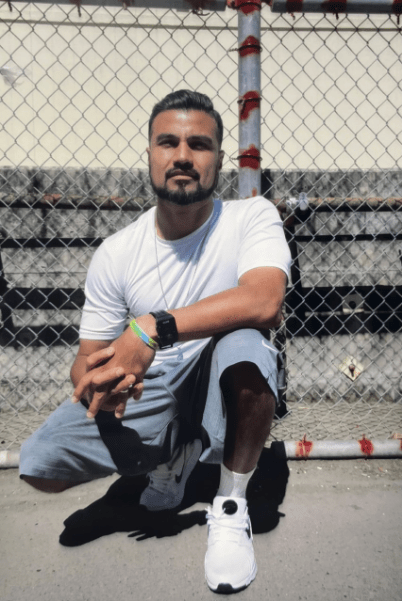 Picture Day on the Yard 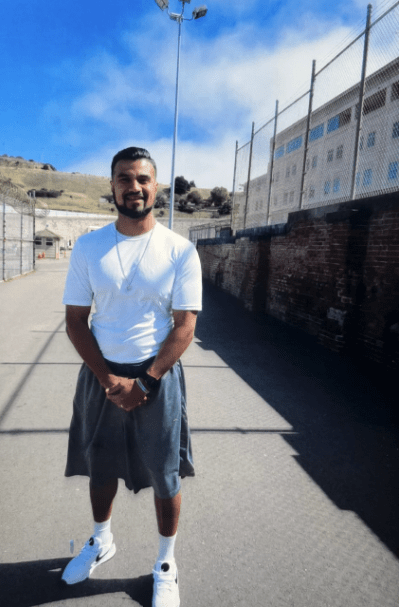 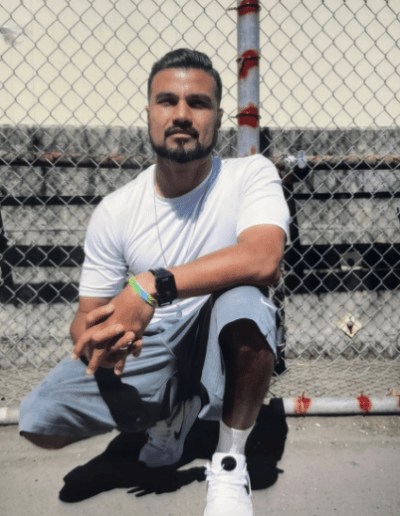 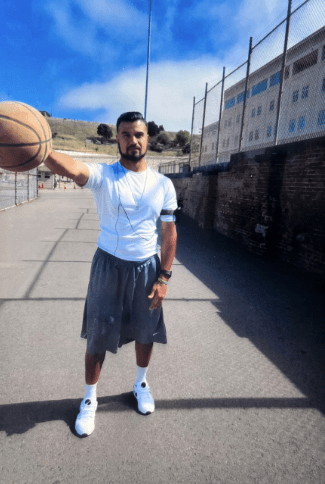 “You never know what is going to happen here,” the Lower Yard Correctional officer told us as we waited to take a picture. He tells people this when they ask when he’s going to take pictures again. I went to the yard to take a picture because you just never know when you’ll be out on the yard again. None of us knows what may happen in our life period, and so even the simple act of taking a picture is a blessing. I have gratitude for the opportunity to even be alive and to share a moment in time here with loved ones who are far away, living on the outside. All the twists and turns of the endless Covid lockdowns, the transfers, the terrible sickness, or perhaps even the good news of freedom will only leave the memories of the wounds and the healed scars from this place. In the first Covid lockdown, I didn’t get to go out to the Lower Yard for 15 months. Like most everyone else, I hadn’t gotten to see my loved ones for over a year until I had a video visit. I’m mindful of all those that never saw their loved ones again because of Covid, of those who never got to see their loved ones again because of acts and crimes like mine, too.

When I walked out on the yard, it was cold and windy, only a few people were out. Only one guy, Don, was waiting to take a picture. He was taking a picture for his daughter, who he missed. She wanted to see him even if it was just through a picture. We were actually standing there waiting for the officer when we learned he had taken an older gentleman to the hospital because he’d fallen down the stairs and scraped his hand. For his picture, he held up his bandaged hand, and told us the picture was for Humans of San Quentin. He took a tumble for us. As the wind blew, the five of us encouraged Don to smile big for his daughter, because we knew the importance. He did, not with that gloomy expression that can come across in prison pictures so much with strained smiles, but with a real eye-smile. I took mine with a basketball and my workout gear since these are the things that I most do outside. It’s as if I’d look on a normal day on the yard for my family to see, and even though my own smile looked a little strained, I was content with the pics.

The cameraman, Tony I learned, was amazed by his own work. He said, “Man, it looks like a magazine picture!” As we waited for the pictures to print out, Tony told me that he thought he’d never be here to do something like this. He never thought he would make it out of the Secured Housing Unit in Pelican Bay State Prison after a lifetime there. He said that he had never touched a digital camera before and was surprised that he was trusted with such a precious item when he volunteered for the job.

Today, I really saw the struggle from behind the lens.

Mt. Tamalpais, San Quentin’s on-site college program, held their first graduation ceremony as an accredited institution. It is the only independently accredited college entirely within a prison in the US.

This was the very first graduation since 2019 at San Quentin State Prison due to Covid-19. The procession of the graduates was the highlight of the year for the residents and the administration.

In the past several months, San Quentin has been on modified program due to several recent outbreaks of Covid-19 from the Omicron and BA.2 variants. This has made it difficult for faculty and students to consistently be present.
On May 3, 2022 classes were temporarily canceled for some of the participants after several residents from one of the housing units, West Block, tested positive for Covid.

Shortly thereafter, the rest of the prison’s housing units also went on quarantine, temporarily canceling classes and the semester.
As a result, some students had to make up their final exams the evening before graduation, while others will complete their coursework in the summer and fall. There was uncertainty on whether the graduation ceremony would even be held due to the repeated outbreaks.

June 24, 2022 was a brighter day that brought together the inside and outside communities to commemorate the accomplishment of the MTC graduates, who earned an Associate of Arts Degree in Liberal Studies. This day was enjoyed not only by the faculty, but several members of the prison administration, family members and friends who were able to cheer on their loved ones’ accomplishments in person. This was the first time since 2015 that family members were allowed to be in attendance in the Chapel area on the prison grounds alongside their loved ones.

The ceremony began with the graduates entering the Protestant Chapel to loud applause. The event was hosted by Dr. Amy Jamgochian, Chief Academic Officer for MTC, followed by opening remarks by Warden Ron Broomfield. “This is such an important day for our graduates, and their families, and in light of the last couple years it is an important day for San Quentin as well,” said Warden Broomfield, “I am very proud of each and every one of you.” He gave a ‘Five cent history lesson’ about the inspirational and underrated life of George Washington Carver, referring to the importance of education especially as it relates to transforming the lives of those incarcerated. He encouraged the graduates with Carver’s words; “Education is the key to unlock the golden door of freedom to our people.” Given the historical context of these words, he challenged them to answer the question in their time, “Who are your people, who are you going to lift up?”

Chan, 56, a graduate said, “The lockdown does not matter to me, what matters is having the experience of finishing something I started 38 years ago, to finish anything is a great feeling of victory.” Chan was able to apply to UCSF and was accepted into Project Rebound, a college assistance organization with a full scholarship. However, he was denied parole by the Board of Prison Hearings and will need to reapply once he is found suitable. His greatest hope is to get out and to continue with his education. Dr. Theresa Roeder, Ph.D, Chair of the Board of Trustees, was also present and commended all the graduates for their determination and for not giving up under the circumstance they face. “We hope to continue doing what we are doing and to serve our students better.” This graduation was also part of a family reunification. Graduates, family members, and friends were allowed to take pictures in the chapel garden and socialize after the ceremony. For Robert it was a sweet moment as he was able to hug his sister, Donna for the first time since before the pandemic. “It makes me very proud to see him again,” said Donna, “I love to see them mingle and be able to have all this.” For Taylor this was not his first associates degree “This in person experience is different compared to having to do it through the mail, being that the students at MTC get to interact with their teachers and students. This makes the process more personal when there is a human connection,” said Taylor. There were others like Christopher, who was not sure if he was going to be able to graduate. He was concerned not only for himself, but for his fellow graduates not being able to make it due to Covid 19 protocols. “Now it is a relief and I will feel better when I get my diploma,” said Christopher, who is aiming towards a Master of Fine Arts (MFA) that he will work on upon his release. Formerly incarcerated Tommy “Shakur” Ross, class valedictorian of 2019, gave a speech. He joked about being the “longest reigning valedictorian in the history of Mt. Tam College.” Ross served 37 years before paroling 60 days ago. A commissioner at his 2016 Parole Board hearing told him, “We’re not letting you out of prison with a high rate to recidivate.” He talked about the critical thinking that he learned in college which helped him to make human connections with former and currently incarcerated people during an international prison radio conference in Norway. He encouraged the graduates, joking about still being a high risk, displaying a GPS ankle monitor and referring to how he was not even supposed to be at the graduation as a freed person.

“You and I may be here at San Quentin because of our worst decision, but we are here today because of our best decision,” said John the Valedictorian. John reflected on the challenging times he and his fellow graduates, and the MTC faculty have been faced with and yet how they continued to demonstrate their commitment, dedication and compassion. He noted how they refused to be deterred from MTC’s mission of the ultimate goal of life-changing educational opportunities. He told the graduates that they now understand the important role that a college education plays in making them successful citizens in this community and, by developing a knowledge base and critical thinking skills, decreases recidivism, and makes them more successful returned citizens in any community. John expressed his eternal gratitude to MTC for allowing him, “To feel that sense of safety and purpose once again in prison and for the privilege of surrounding myself with like-minded individuals, equally knowledge-thirsty and possessed of a shared desire for self-betterment.”

Pat Mims, formerly incarcerated San Quentin resident, alumnus and now MTC Board of Trustees member expressed his gratitude for being able to speak to “my family, my brothers.” Mims sang out the mantra he and his childhood friend created when they were in high school, “Belly full, but I’m still hungry!” His friend was tragically killed in a car accident on the fateful night he decided to not join his friend at a party. He could have been in that car. He had to go to work at a mortuary and that’s where he saw him. The first thing that came to his mind was their mantra. He was released in 2009. “I had 200 bucks…after 20 years. I didn’t know what I was doing at that point, I didn’t know where I was going to go… but I knew one thing, I had a degree, the clothes on my back and the idea that I could succeed.” In 2016, after he shook President Obama’s hand he told himself, “I can succeed, ” Mims added, “Do not worry about when I get released, worry about how I can be effective in the community that I’m in today.” He served 20 years on a life sentence.

“I was in the seat that you are in as a graduate…I worked so hard, that it became time to work for others,” Mims added. He is also the director of the reentry hub services for all of Western Contra Costa County, called the Reentry Success Center operated by Rubicon Programs. “I help people like us to reintegrate into society,” said Mims.