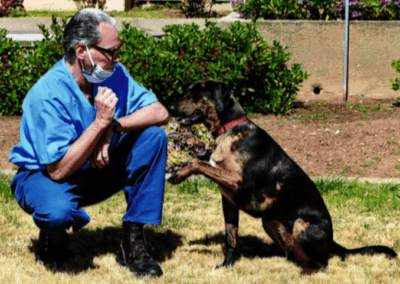 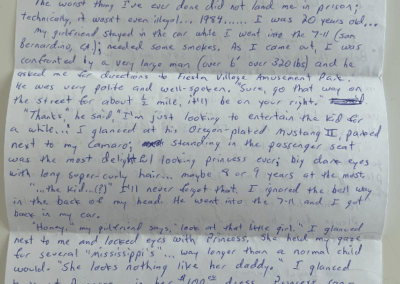 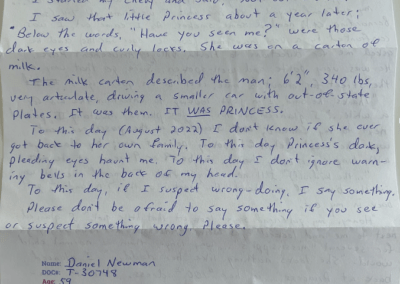 To this day I don’t ignore warning bells in the back of my head. If I suspect wrong-doing, I say something. Please don’t be afraid to say something if you see or suspect something wrong. Please.

My girlfriend stayed in the car while I went into the 7-11. I needed some smokes. As I came out, I was confronted by a very large man, over six feet and over 320 pounds. He asked me for directions to Fiesta Village Amusement Park. He was very polite and well-spoken, “Sure, go that way for about half a mile, it’ll be on your right.” “Thanks,” he said, “I’m just looking to entertain the kid for a while…” I glanced at his Oregon-plated Mustang II, parked next to my Camaro; in the passenger seat was the most delightful looking princess ever; big dark eyes with long super-curly hair… maybe eight or nine years old at the most. I’ll never forget that he used the word ‘the kid.’ I ignored the bells going off in the back of my head. He went into the 7-11 and I got back in my car. “Honey,” my girlfriend said, “look at that little girl.” I glanced over and locked eyes with Princess. She held my gaze way longer than a normal child would. “She looks nothing like her daddy.” I glanced back at Princess… in her $10000 dress. Princess continued holding my gaze. Another bell in the back of my head went ignored. I started my Chevy and said, “Not our business.” I saw that little Princess about a year later, below the words, “Have you seen me?” were those dark eyes and curly locks. She was on a carton of milk, where they put pictures of kids that are kidnapped. The milk carton described the man – 6’2”, 340 pounds, driving a smaller car with out-of-state plates. It was them. IT WAS PRINCESS. Not reporting him was the worst thing I ever did. To this day, I don’t know if she ever got back to her family. To this day, Princess’s dark, pleading eyes haunt me. To this day, I don’t ignore warning bells in the back of my head. To this day, if I suspect wrong-doing, I say something. Please don’t be afraid to say something if you see or suspect something wrong. Please.