I have been in prison since I was twenty years old, I’ve never been married, no kids either. Yet, I am a self-proclaimed artist, poet, short story writer, philosopher, Christian and preacher. I began my fall to prison by freebasing cocaine. It completely ruined me. It took away my moral compass and made me into a Dr. Jeckle/Mr. Hyde. People who argue others use cocaine and don’t do what I did—but they don’t consider how complex people are. Everybody who drives drunk does not crash. Everybody who gets slapped or punched does not feel a mandatory act of revenge/retaliation is necessary. Three people can grow up in the same house and one ends up famous and rich, one ends up doing life in prison, and one ends up dead. There is no saying that someone like me, who used cocaine and had it ruin my life, is inherently different than someone who uses cocaine and it does not ruin their life. I’m deeply sad I ever committed crimes and am equally sad I ever used cocaine. Some things you can’t repay once you take them, but a thief who apologizes for stealing is better than a thief who lies and says he has done no wrong. One is honest and ashamed of stealing, while the other is unremorseful and possibly a committed die-hard thief. 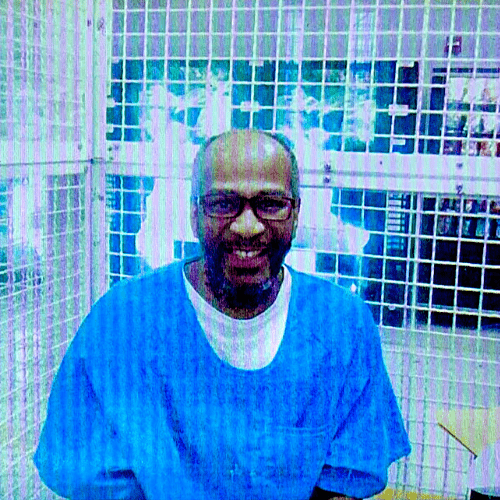 When I first got arrested on my death penalty crimes, back in 1984, I had a few different girlfriends at the time. I did a bit of letter writing in those times; I discovered I had a knack for writing poetry. At first it was all love poetry—and all rhythmic/rhyme type poetry. Later I began to write poetry about all kinds of topics, and different forms including sonnets, in various forms or anagrams especially anagram poetry using a person’s name vertically upright so that the letters of the name are the first letters in the words of each sentence of the poem. I also began to write some poems that do not rhyme.

I had a knack for doodling in my letters which grew into the really extensive type of mixed media artwork I do now. This is where my drawings and poetry came up together. I’ve made countless greeting cards for holidays, but mostly love cards which all had my original drawings and original poetry. In those times I was not as christian based as I am now and many greeting cards were X-rated. I sold a lot of greeting cards for years, and that’s the only money I’ve ever made from my poetry. I entered poetry contests which turn out to be the type of contests where you don’t win but they want to use your poems in books that they sell even to you that you get no proceeds from. I imagine my poetry appears in at least one or more such books. I honestly do not know how many poems I have written. I have been writing them off and on since the mid 1980s. I’m sure I’ve written hundreds of poems. Though I remember the name of a few, the only one I know by heart is the first one I wrote, titled, “Patience Is A Virtue”. The only reason I  remember it so well is because it was my first. Even though it’s a rhyming poem, it resonated with me like it was something special. It made me feel like I was unique  and articulate with words because of how it sounded reading the rhymes about love aloud. I sent the poem to my girlfriends, used it in greeting cards I’ve sold and shared it with many people—the only poem, of the hundreds I wrote and never kept a copy of, I know completely by memory is “Patience Is A Virtue”…

PATIENCE IS A VIRTUE

A poem by Kevin

They say that patience is a virtue,

There are such long nights I spend without you.

There is not a minute of the day you don’t cross my mind,

My love, in short, I think of you all the time.

Wanting a needing you as I do,

Makes the days longer that I ensue.

The minutes on the clock slowly fade,

An hour or a day is like a decade.

Each day and each week the waiting persists,

And to think of you is torture I cannot resist.

How much longer will I wait I wonder,

For my wants and needs to have turned to hunger.

Every time I think of you,

I think of the sadder things that time can do.

Once we regain time on our side,

We will take each other to the highest highs.

I’m hoping that day won’t be too far,

When I’ll join you my love wherever you are.

We will laugh, we will cry, and then we will kiss,

And do all the things together we both so miss.

We will talk about how things were with me,

We will picnic under a shady tree.

We will talk about how things were with you,

And eat peanuts and candy at the county zoo.

The most important things to me,

Are that I’m with you and that I’m free.

So keep in your mind that day anticipating,

The day we will spend no longer waiting.

They say patience is a virtue,

Soon I will be with you.

Patience and love, are two of many philosophies I’ve woken up to while I’ve been on Death Row. Every person should want to be the best person they can be no matter how the world may pull and tug us in negative directions. The world is going to come at us sideways sometimes, so we have to combat that by taking a proactive approach to contributing things to our inner good that ends up affecting our outwardly good and tolerance towards others.

During my time on Death Row I have written a bunch of short stories. I’ve written using such topics as a man’s experiences traveling across country on a greyhound bus, a slavery story, a western, a futuristic Sci-fi with  a giant space station the size of a city, etc, etc. My short stories are usually 5 to 50 pages in length. It’s been a long time since I wrote a short story. I have never sold nor even published any of my short stories. I usually write them and just give them to someone, like my friends or the fellas here with me. I could write a whole book on everybody I’ve known who passed away in the years I have been in custody. Losing anybody in prison who made life more cool in this messed up kind of way to live, and it’s a big loss…but a story I will remember forever.

I made a key for you all reading my story so that we can all know how close I was to some of these folks.

✳ Freaky Pete was like a pawn shop, you could buy or sell anything through Freaky. If you were bored he could tell you a million crazy stories that were really true about his life. Bad health problems.

✳  Taco was one of my basketball buddies. While I was away in Los Angeles on appeal he died. Heart Attack on Basketball court

✳  Stag was a friend I knew in L.A. County jail during my appeal. I never met nobody like Stag, he was cool. A diehard Crip. he knew everybody. He loved his daughter and the Raiders football team. He would give the shirt off his back to anybody—a straight out thug though. He died from bad health.

✳  Old Folks; This guy was a good friend to just about everybody. His last months of life he was in a cell about 10 cells away from me. It surprised me greatly that he was in his cell instead of a hospital. This dude was really, really cool and always a friend to me for many years. He really suffered a lot of pain, dying from Cancer.

✳  Wilbur was an old guy who still played basketball with us. He had a filthy mouth and was just fun to be around. He died of old age while he was out to court on appeal.

✳  Cuba was a basketball buddy of mines, a chess playing buddy of mines, and someone fun to talk to and kick it with. His health had been on the decline—almost all of us on Death Row including me caught that Coronavirus, but people like Cuba with declining health did not survive it. It was 20 or 30 Death Row inmates altogether who died of Covid-19 I think.

✔ Slim served time in California Death Row but got sent to another state where he also had Death Sentence. Slim was a basketball buddy—I enjoyed shooting basketball with him. He always had a perm he took real good care of, like James Brown. Slim got executed there in that other state.

✔  Sam and I went all the way back to L.A. county jail 8 man cell days, before we ended up on Death Row. Sam kinda lost his mind a little after coming to Death Row, but was still real cool, not a threat to your health to be around. Killed accidentally by prison guards on Death Row with too much pepper spray.

✔  Baby Kelsie: It blew me away when Baby Kelsie died. He had bought some of my greeting cards I made that same week. Bro had a fly perm and was one of the buffest muscle-bound dudes on Death Row. Suicide.

✔  J.D.  seemed like a happy-go-lucky dude. I was surprised to learn he took a bunch of pills. I talked with him on the yard a bunch of times—played basketball with him too.  Suicide.

✔  Tom was a Vietnam vet. A real cool mellow white dude. He was one of the first one’s put to death when California started back executing people. Tom was one of the one who got put to death by gas—a torturesome process of breathing in ammonia laced with cyanide. Executed.

✔  Pride was hard like Stag, but Pride is from Northern California. Pride used the weights on the exercise yard like lifting weights was his religion. He was an alright dude though. I think we lost the privilege of having weights on the yard right before or right after Pride died. I always associate him with those weights in my mind. Shot & killed by prison guards during a fight.

⭕  Tookie Williams: Big Tookie was HUGE. I don’t bang, but grew up in Los Angeles in mostly Crip areas. I got to shoot basketball a few times with Tookie and was on the yard with him a few years. I’ve found him to be cool and the integrity of the yard and the yard’s mentality was mellow when he was here. Executed.

⭕  Lado: A latino gang member I knew in Los Angeles county jail during my death penalty appeal. He was a high ranking gang member but he treated me cool and called me by name. Drug Overdose.

⭕  Steven. Just like Old Folks, around the same time as Old Folks had his cancer, Steven had his cancer in a cell almost right above Old Folks. Steven was one of my best friends, so that made Steven cool with me. Cancer.

⭕  Malcom was the oldest black guy on my yard. He was Muslim, and cool to talk to. Old Age – Bad Health.

⭕  Richard “The Night Stalker”: Yes, this is the Night Stalker. I met him in the Hole when we both were there. I at that time was in my Super Christian Era and even talked to Richard about believing in Christ’s salvation. Drug Overdose.

Every person should want to be the best person they can be no matter how the world may pull and tug us in negative directions.