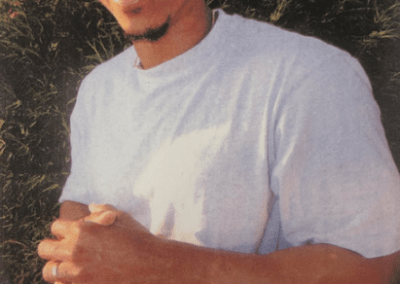 Spending most of our lives being deprived of genuine love and acceptance left us devoid of a sense of identity, value, and purpose. This was one of the reasons why many of us, turned toward a life of drugs, money and flashy things, hoping to somehow fill that undesirable emptiness we felt inside.

I hear – my mother overdosed on heroin, my father was killed in a Safeway parking lot, my uncle molested me when I was a kid – because I was hurt and embarrassed – I never told anyone. These traumatizing events are the reason many people are  addicted to impulsive behaviors. Unfortunately, the healing process for many people incarcerated will remain dormant as society continues to view them through the symptoms of their brokenness, rather than considering the root of their troubles. In my childhood being perceived as a thug, a hoodlum, or a lowlife was normality. I suppose it was a way for those who considered themselves “above me” to categorize my person as being unworthy or insignificant. Those who had frowned upon us kids had never taken into account that many of us were raised by struggling mothers and parents who had taken us in as we were being cycled through the foster care system. Those of us who had fathers, let’s just say that they were present, but never really present. Spending most of our lives being deprived of genuine love and acceptance left us devoid of a sense of identity, value, and purpose. This was one of the reasons why many of us, turned toward a life of drugs, money and flashy things, hoping to somehow fill that undesirable emptiness we felt inside.

As a result of what we lacked, we compounded the same hurt we sought to eradicate. The walls we built around our hearts to protect ourselves from pain had quickly become a prison, and the hurt we wore like a badge of honor was draining the life from those we claimed to care for. What’s worse, we had fallen for measuring our self-worth by the ever-changing opinions of other people. In a nutshell we were drowning, and no one stopped to throw us a life jacket to keep us afloat. The more I conversed with other men about the context of our upbringing, the more evident it became that we were all fighting the same silent battles. While our hearts cried for help, hoping to become something better, the fear of being vulnerable muzzled us from saying a word–toxic masculinity. We would rather look whole and be broken than to acknowledge our brokenness and risk the rejection of those we sought to impress. But I have learned over the years that if we can’t be real we can’t be healed. I mean think about it–why see a physician when you say you’re well? With this in mind I created Building Blocks. A curriculum that touches on some of the most unavoidable subject matters in life. These topics include everything from love, forgiveness and situational pressures, to identity, emotional intelligence and choices. It methodically blends biblical truths with relatable experiences, providing the reader with a space to be transparent, while offering them a sound perspective on how to better respond to various life circumstances. I have found that providing a platform for men to be honest, while offering them tools to become everything God created them to be has been unbelievably successful. My only goal is to promote edification and a solid foundation for healthy living. Showing love to the unloved, hoping to impact the world one life at a time.