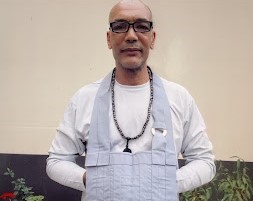 You can’t live in this world without acquiring some baggage. If you could, you wouldn’t be human.

Lorena was born as a result of my brief relationship with an older woman. I was nothing but a boy, playing the part of a man. Unable and incapable of doing the right thing because of my ignorance, I walked away. Before walking away, after seeing my little girl in a crib after her birth, I gave her mom the necklace I wore. It had a small medallion with my initials engraved upon it. “Tell her who I was and why I’m not able to be here.” As I walked away, I felt hollow inside. Some deep part of me hoped that one day, even though I couldn’t define it, the edges of that hope were muted and its center undefined, that my daughter would find me. I often wondered how my daughter was, what her life was like and how I felt like dirt for abandoning her. She searched for me for years. She gave up until her husband encouraged her to renew her search. I am forever in his debt. Lorena located me through Ancestry.com. In the San Quentin visiting room, I met my daughter and held her for the longest time. My sister was there too, who I  hadn’t seen in three decades. My heart became so full that it felt as if my chest would burst! As I held both of them I cried and didn’t want to let either of them go. There were many tears, smiles and laughter. Lorena said I was a grandpa to a boy and two girls. She shared how she felt because of my absence in her life. After learning more about me, she came to let go of those feelings and wanted to begin to form a relationship. How miraculous is that? It is a once in a lifetime chance to repair at least a portion of the damage I caused. Our relationship has grown quickly, it is something I will not squander. My life has been marred by my own darkness and that same darkness has scarred others; yet there is light in there as well. I’m not the boy who felt he had no place to belong, not even in his own skin. I know that each moment is a chance for us to awaken. It is certain that my life is not over, possibilities exist. I’m secure in who I am today, even with all the baggage I carry. You can’t live in this world without acquiring some baggage. If you could, you wouldn’t be human.