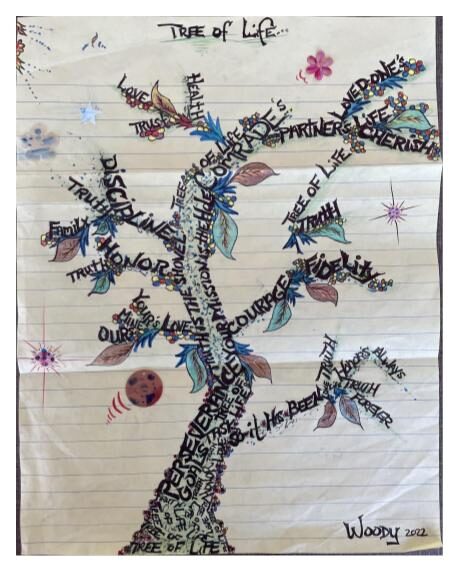 …The difference of the last couple weeks is just crazy! I’m unloading on you because you’re the only one I’ve got. I’m working on a Tree of Life to share with you.

Yesterday, I saw my doctor who told me that my second surgery gave answers as to why I wasn’t healing from my first surgery. I have cancer.

I went in for a routine hemorrhoid surgery. Four months later I was still bleeding and the operation site hadn’t healed. I’d wake up in the morning and have to ‘bird-bath’ to wash the blood off me. I bled in the night and cleaned my boxers. Medical issued me mat coverings to keep the blood out of my sheets. I was hopeful it would end. But no. Month after month I’m still washing my boxers, when I wake, at noon, dinner time, and before bed. Everyday for the last four and a half months.

Finally, I was called back to medical and found out, what they cut out of me was a polyp, not a hemorrhoid. The reason I wasn’t healing is that this little piece of cancer was spreading. Now, there’s three masses on my liver. On top of that I fell-out on the way to chow. The doctors think it was a mini-stroke. But thankfully that’s how they found the masses on my liver.

We caught it early, I hope. I’ll know when I meet my cancer team at Marin General Hospital. Hopefully, the next round of testing will be contained to the colon and liver. The difference of the last couple of weeks is just crazy! I’m unloading on you because you’re the only one I’ve got. I’m working on a Tree of Life to share with you. I’m all over the place right now, kinda scatterbrained.

Me and the world aren’t on speaking terms….In my life I stopped getting personal mail, like yours when my mother passed away. I was gonna say five, six or seven years ago… I’m not really sure about time…. I have nothing to reference events to. Someone caring and believing what I’m saying stopped happening when I made it to prison.

Thank you Humans of San Quentin.