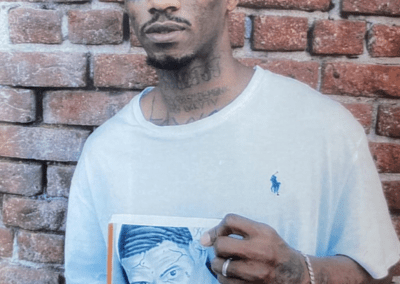 Everybody I thought I knew and cared about seemed to take the approach that I died. But, the reality is – last time I checked, I am alive. The pain and suffering that I’ve dealt with throughout my life has shown me I am very much alive.

Memoir: Last Time I Checked, I was Alive, by Demiantra Clay.

I chose this title for my memoir because, going to prison at such a young age, is like everybody I thought I knew and cared about seemed to take the approach that I died. But, the reality is that last time I checked I know I am alive because of the pain and suffering that I’ve dealt with on an ongoing basis through out my life– that pain and suffering is a constant reminder of my existence.

The most impactful sentences in my memoir are in the Chapter, “Fifteen Years Down the Line,” which is the epilog– it’s looking what happened to me, 15 years later as I reflect on what I’ve been through as a youth offender.

The parts that make it pop are these words:

“I had a lot of close calls, near-death experiences, and warning signs, and I failed to take heed of them because I wasn’t as grown as I thought I was. A life sentence in prison is worse than one can imagine.” This was a reality check!

Here’s a part that let me know I can play a positive role model for youngsters come from this part:

“Right now, we’re on lockdown because the bloods and crips keep getting into it. Lockdowns means we’re in the cell 24 hours a day, seven days a week. It’s good to keep a cool celly due to these circumstances. My celly is a young homie from Village Town Compton Piru. His name is Knucklehead; we were celly’s in Tehachapi SHU. He’s short timing; he gets out in months. I do my best to help him get in the required mind state for success when he’s released from prison.”

I would not be in a good place, mentally, if it weren’t for my wife – that acknowledgment is written, like this:

“Woodie aka Woo Tang aka Heart Throb and I are together. Yuppee my sisteren Preachtree’s best friend since like 1991. Yuppee Mrs. LaWanda Clay is my God-given queen, my wife, and this year in March 2014, she moved all the way from East Saint Louis, Illinois, to Chico, California in order to be closer to me. Tnanxxx Bao Bao; you are the best mommee!!

What I learned about myself by writing this book is that I’m very determined as long as I stay focused I can accomplish what I set out to do, no matter how much I struggle or complicated it might be.